When people question Disney movies, there are always those other guys who say, “It’s a children’s movie, you’re not supposed to question things, yada yada yada!”

But the people who made the movies are adults, not kids. That’s why we question Disney movies 😀

So, *cracks knuckles* here are some questions I have. Feel free to debate in the comments or direct me to the answers if any 😛 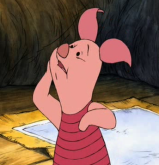 I bet you’re all familiar with Winnie the Pooh. But have you noticed that Pooh, Piglet, and Roo are the only ones that wear clothes?

Do they even need clothes?

It seems that Pooh’s brain is made of cotton?

If his insides are cotton, how much of it is cotton? I ask this because Pooh eats honey. If his stomach is also cotton, where does it get digested?

We see scenes in the Disney song where Pooh’s butt rips (ooh, graphic) and he has to tie the seams together (note how horrific that sounds). We see cotton sticking out. So, we can safely say his butt is cotton.

Since he gets hungry, probably his stomach is like our stomachs?

Pooh eats honey so what do the others eat? I don’t remember any episode where they actually eat. Wait, actually, there’s an episode where Pooh gets stuck in Rabbit’s hole from eating too much honey and getting fat (which also shows that food works on Pooh like it works on any living thing) and Gopher comes over and starts eating. He eats summer squash…raw. But no one else seems to eat.

Rabbit probably eats vegetables because he grows them.

The others? Who knows. I think there was a celebration scene where they all had cake. So at least they eat dairy 😛

Actually in real life, owls hunt mice and other small rodents. So in a real life scenario, Owl might be a danger to Gopher. And maybe even Roo and Piglet.

How old would they be if they were humans? Or, are they aging like their animal equivalents?

Piglet is a piglet. Does that mean technically he and Roo are the same age?

Also, do they age?

If they do age, do they die? (that got dark quick)

Kanga has Roo. Kanga is the mother. Where’s Roo’s father? 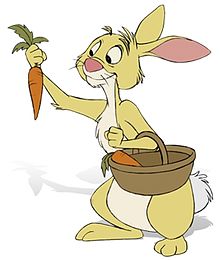 I remember even as a kid, I used to have to remind myself that Rabbit is like…a guy. They say “he”. I have nothing against guys with high voices. But could there be a possibility that Rabbit has no gender? Or Rabbit is an unintentional transgender character?

I know I’m going quite far with that but think about it. And re-watch some of the episodes. You’ll see what I mean 🙂

Tigger is not a Tiger

Tigger can bounce so that means he’s not a representation of a tiger. He’s a mythical creature that has coloring and stripes like a tiger. Because of this, maybe he literally is “the only one” of his kind. (This wasn’t a question but what do you guys think?)

Eeyore is made of wood? 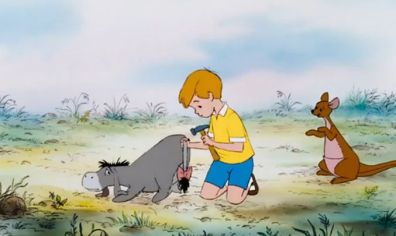 You might remember that Christopher Robin has to hammer on Eeyore’s tail when it’s fallen off. Ever wondered why? Is he made of wood inside? Or is just his butt wood? (what is this thing with butts?)

Also, another Eeyore thing I noticed from the pic; that ribbon. What’s the story behind that ribbon? It’s so pretty and cheerful and very un-Eeyore like.

The Original Residents of the Hundred-Acre Wood?

Also, Gopher, Rabbit, Owl, are the only ones that have very animal bodies. Rabbit and Gopher even have individual fingers on their hands…er, paws.

But Kanga, Roo, Pooh, Piglet, Eeyore, and Tigger have mitten hands and even parts of their bodies you can see the seams that show they are walking, talking stuffed animals.

My theory is that Gopher, Rabbit, and Owl are actually the original residents of the Hundred-Acre Wood because they are more animal like.

The others are the new residents, stuffed animals magically made to walk and talk…through…the…uh, love of Christopher Robin 🙂