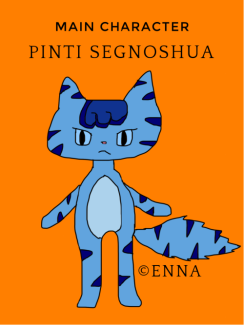 Left: By Daisy (catsaredragons) on Wattpad

Story Status: Main Character of The Choice of Aurvandil

Rank: Shamala (female Shaman, her father was the head of the clan)

Species: Kathula (anthropomorphic cat race with blue fur of varying colors depending on their clan, uses magic through potion-making)

What to know more about Kathula? Check out this wiki!

OTHER THINGS about her: COMING SOON…

Kathula often come in different shades of blue from the darkest navy to the lightest almost white blue. Pinti is a soft sky blue with dark blue stripes. Her tail also has stripes on it. She is not a long-hair but a semi-long-hair.

Kathula age the same way humans do despite the fact they look like cats. However, Kathula think it rude when humans see them or treat them the same as the cat-animals (which do live in a part of their world).

Most often they will not wear clothes as their fur covers them up. Pinti often chooses to wear clothes when walking among Humans but most of the time she takes them off, however, this does not mean she is naked.