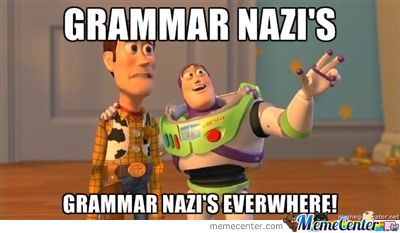 Oh stop it, Buzz, don’t accuse me! I’m not a grammar Nazi. I’m a grammar…semi-Nazi. If I see wrong grammar but I need to focus on understanding the context, I will focus on the context first. AND THEN, I’ll say, “You know, I just noticed a little thing. Just a little grammar thing…”

I actually consider myself as having only ONE alter ego in the definition discussed in this article.

Now, before we get into pen names, let’s break down “alter ego” to really get a sense of it.

ALTER: Change in character or composition, typically in a comparatively small but significant way. (Oxford Dictionaries a.k.a OD)

EGO: A person’s sense of self-esteem or self-importance. (OD)

So an alter ego should be a character that gives a person a sense of self-esteem or self-importance.

But OD, can’t an alternative personality also give someone an ego boost? Can’t someone feel a bit superior for a while when they are being their alter ego? Because that’s what an ego is?

Isn’t Superman a.k.a Clark Kent a good example of an alter ego (boost)?

Let’s first imagine he was Clark Kent before he was Superman.

Stay with me now, I know this isn’t how the story goes. Just, be patient, thanks.

Clark Kent works at a newspaper company, right? He’s like this timid, nerdy, shy dude who has a crush on one of the journalists, right? He can’t seem to impress her. He makes mistakes and one wonders why ever did his boss hire him.

But when he’s Superman, he knows exactly how to get a girl. His alter ego gives him an ego boost and makes him confident and he can make smooth moves. He knows exactly what he needs to do and rarely makes a mistake.

Now, let’s go contradict ourselves, shall we?

In the story, this is the way it’s played out. Superman a.k.a Kal-El ends up on Earth and needs to hide his identity and be normal so he takes on an alter ego called Clark Kent (basically :P).

But we just said an alter ego gives that person an ego boost. How does someone like Clark Kent give Kal-El an ego boost? More like an ego-un-boosted.

What I’m saying is
the definition for “alter ego” is wrong because ego is a sense of self-esteem or self-importance.

Clark Kent would then just be Superman’s alter.

Yup. Nothing “wow” about that.

Then a question arises: what is Eminem then? We can say it is an alter. Just an alternative way to express himself.

Then…alter egos eventually create alters? Am I getting too deep for you guys?

I used to have a pen name that served as an alter. It was a slightly different character from mine. Just slightly.

My other pen names are just pen names. They aren’t different from me and they don’t give me an ego boost. They are just other names that I want to use.

What are your pen names or even usernames for you?

Are they alters, alter egos, or just another name you want to be called by?

Do you even think this distinction between alters and alter egos exists, or am I thinking too much?