Once you finish a story, once you’ve exhausted yourself dealing with one world or one character, or many characters, you think you could use a little rest, right?

Well, right, in the sense that you need it. Go sleep. Now.

A creative brain is never at rest for long. Sooner or later your brain wants to work on something. Anything. It needs to write novels like some drug which you cannot get enough of even if your body crumbles.

So, when I finished writing two novels simultaneously, my creative brain wanted to immediately work on another project. Yet, this next project was different from my other ones because I had to start with a bunch of world building.

Normally, I’m a pantser. I just start writing it. But, that wasn’t working this time because the world was none like I had written before.

But at the end of the tunnel,

there is a squirrel. 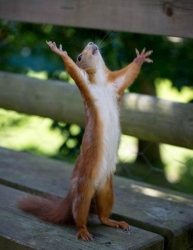 (On a serious note, I struggled because I was using a writing method that does not work for me and how I organize things for my writing. I thought I could push through with this new method of world building first and then write. I was wrong. Mar, 31, 2020)

2019 Me Attempts to Save Myself From the Struggle

I wrote an article in my Blogger blog called “Story Outline Template”. This is something I used to do for writing for National Novel Writing Month (until I got used to doing NaNoWriMo). Basically, it’s just about how to write an initial story outline.

You can check it out for yourself here: Story Outline Template by me on Blogger

(I shall take this moment to slow-clap myself for trying to struggle through a method that was not working for me. If you are struggling so much, it might be good to stop. Trying to add a new method on top of everything would just pull you down into a further rut. Take a break from writing even. I had finished two novels simultaneously. I just really needed to take a break

I was lost with what aspect of world building I needed to do next. Trying to write the first draft was not going well either. I’ve rewritten the beginning four times, changed the point of view (POV) twice, and then I thought about switching between POVs.

I came to the revelation that outlining the story will help me identify points of world building and also decide the direction of the story before getting too much into the writing bit of it.

Based on my experience, it’s a very good idea to make a story outline.

This article I originally wrote on January, 20, 2019. Ha. Ha. Ha! It’s been over a year since I wrote this. How silly. Let me update this post. Let me tell you I failed.

Let me tell you I failed so badly I abandoned the project, went on to editing my two finished novels instead, and now I’m working on a completely different project.

Let me tell you, even someone who has been writing for almost ten years can still fail. So, you’re not alone.

We’re all failing in this together.

Cynical attitude aside, we can also learn from our failures. I have learned that world-building first, outline later method does not work for me. I just can’t do it like that. I have to write first and then fill in the gaps like the true pantser I am.

I have most certainly learned my lesson.

The project I planned to write, will get written. I promise you that. Maybe not right away because the failure is still deeply attached to it and I cannot get passed the writer’s block for the project just yet.

Maybe I will. Maybe I won’t. I’ll just take creativity as it comes to me. It’s in those most natural ways that I’ve been able to write stories that I enjoy writing.